On stage, the familiar instrumentation was front and center. Guitar amps, a bass amp, and a seat clearly intended for the percussionist all sat atop a Persian rug. These amps and instruments were clearly American in origin: a Fender Tornado and an Epiphone Les Paul guitar, and the amps, a Fender Twin Reverb and a Roland give a hint at what is to come.

Just as they take the instruments from American rock music and create their own language, they have done so with the actual stylings of American rock music. This new style the band has pioneered is referred to simply as guitar. If the guitars were replaced with koras, ngonis, or njarkas, it would be remarkably similar to some of the other music of Mali.

But, Tinariwen’s music is not entirely Malian in descent – in the vocal melodic lines one can clearly hear the influence of Berber and Arab vocal inflections. Having listened to their two CD releases MANY times, this cross-pollination becomes more apparent. This is where the real music happens. When people of different traditions bring their histories to the table, and then view the recent cultural and musical happenings through that contextual lens, exciting things happen. Exciting things happened on this night, for sure. 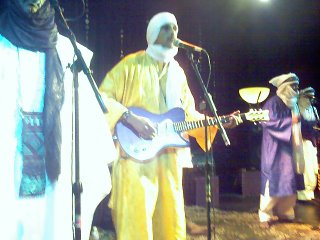 The band took the stage in their striking full-length wardrobe and face-covering scarfs. The textiles were a brilliant white, with elaborate patterns woven right in the cloth itself. The scarfs and head coverings were removed by almost all members as things heated up throughout the night. Most were in sandals, while the eldest wore black dress shoes and the bass player wore motorcycle boots. Again, another nod to the living musician, rather than the museum artifact or cultural curiosity; these people are real people.

The music, on the other hand was unreal. The first few songs were with an amplified acoustic guitar. While as many guitars on stage as those that could play them, only two played simultaneously during each song. One guitarist, the one closest to us, played rhythm guitar all night long. About 95% of his playing was a variation of a power chord; the ‘A’ string would be played with the thumb, followed closely by a quickly muted strum of the rest of the strings. This technique filled out the sound, kept rhythm, and most interestingly, turned the guitar into a percussion instrument. This phenomenon of using a melodic and chordal instrument as percussion is also seen in traditional West African music. 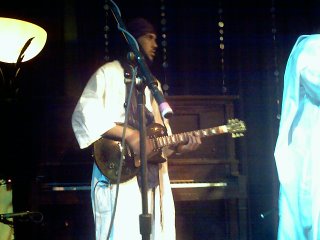 When one of the other men played lead guitar, they also sang. In each song there was a lead vocal part as well as a section for the rest of the group to join in chorus to drive everyone further into ecstasy. After the first 3 or 4 songs with the acoustic guitar in the lead were finished, the rest of the band took turns donning guitars and singing. Along with the wailing Fender Tornado mentioned above, the other lead electric guitar was a strikingly modern/retro Danelectro purple axe. It looked great, but the sound did not match the bite of the Tornado. One of the players even got this guitar to sound like a pedal steel guitar.

Each tune followed a similar arc: intro, verse, chorus, verse, chorus, insane blazing solo, verse, chorus. The voices were beautifully rich, and in the upper levels of their natural range, revealing the Northern African / Arabic influences. The single variation was a rap in French that one of the member had put together. The studio version of this tune, is on their most recent album, Amassakoul. The crowd went nuts for his smooth and convincing delivery. Look out Jay-Z!

The percussionist played a single hand drum similar to a doumbek for the entire evening. The rhythms were in 4/4 and 5/4 from what I could surmise, and all were comfortable with it. Never have I been at a concert where I was to be so enraptured by the rhythm — while clapping along, I found myself nearly in a trance, with goosebumps. Several times. Amazing.